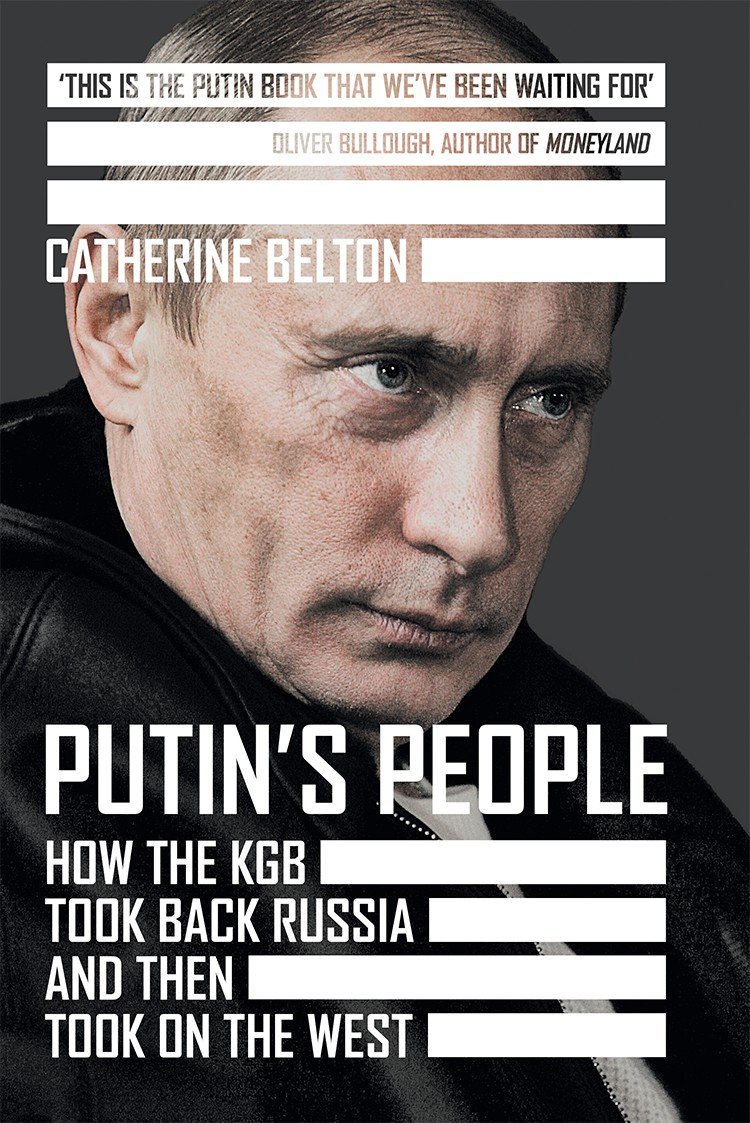 NOTE: It’s difficult to read a book like this while a Russia is in the midst of an invasion of Ukraine. I’ll try to keep this review about the book as much as I can.

What I learned from this book?

This was a deep labyrinth of a book. It is very well researched but it is dense. Parts of some chapters sort of overlap when she’s telling another part of story but needs context from another part of the story she’s already covered.

Here are many, many quotes that stood out to me:

For Putin and his supporters it [election of Yushchenko] was a devastating defeat that many have not forgotten to this day. The fallout from what became known as the ‘Orange Revolution’ was so great, the blow to the Kremlin’s plans so devastating, that…Putin tried to resign.

Putin seems to be stuck in a Cold War mentality of East vs. West. He seems to be driven to create a legacy for himself as the man who ‘made Russia great again’. As a person living in Taiwan, this is slightly alarming because we live next door to another madman who wants to reclaim ’lost territory’.

…the kleptocracy of the Putin era was aimed at something more than just filling the pockets of the president’s friends. What emerged as a result of the KGB takeover of the economy - and the country’s political and legal system - was a regime in which the billions of dollars at Putin’s cronies’ disposal were to be actively used to undermine and corrupt the institutions and democracies of the West.

Anatoly Sobchak, upon hearing that Putin was chosen as Yeltsin’s successor… ‘Sergei, this is the biggest mistake of your life. He comes from a tainted circle. A komitetchik cannot change. You don’t understand who Putin is.’

Putin ‘had a sacred mission to save the country’, one person close to Goutchkov said.

…to Western eyes, the rest of the nation’s business still appeared to be largely independent. Yeltsin-era tycoons like Abramovich were seen as symbols of modernizing, pro-Western forces in the Russian economy. Most importantly, it seemed, for once the economy was booming, and hopes grew that an emerging middle class would one day demand a greater say in the political process.

We are still waiting for that in Russia and China. The West’s naivety about this is maddening. I think they remain deliberately ignorant so they can profit off these nations while turning a blind eye to corruption and human rights abuses (examples: China - Xinjiang, Taiwan, HK / Russia - Ukrain, Crimea, Georgia, Chechnya / Israel - Palestine etc, etc).

There were the days of plenty and stability. And although the oil-price surge driving it was entirely unconnected to him, these were the days when Putin’s godlike status as the tsar who saved Russia was established. It was part of an unwritten pact that the people of Russia seemed to have made with their president. They chose not to notice the increasing state corruption, the growing arbitrary power of the FSB and all branches of law enforcement over businesses large and small. They didn’t care about the clampdown on media freedom as long as their incomes were growing, as long as there was finally stability.

This is the same balance that China has to strike. I hope the economic situation in Russia due to sanctions is a huge warning to China of the repercussions they will face if they try to take Taiwan by force.

The KGB had learned well the lessons of the Soviet past. Instead of an overbearing state, capitalism had become an instrument that allowed them to act as they wanted. Indeed, they believed that, just as Geneva associate of Jean Goutchkov had cynically put it, people were content if they had ‘a fridge, a TV, a house, children, a care For the rest, more or less, you don’t care, as long as your material situation isn’t impacted’

These economic sanctions currently in place in Russia due to the war will be a bit test of what will a population do to resist when all their ’nice things’ are taken away. Will they lash out against their government? or just take it? Right now, all eyes are on Homo Sovieticus right now.

One of the reasons Russian companies were heading to London [LSE] in droves was that the standards required for listing there were far less stringent than those in New York [NYSE]. In the US, regulations required the chief executives and finance directors of companies seeking a stock exchange to sign off on the accuracy of the financial accounts. If anything turned out to be not true or misleading, it was treated as a criminal offense. ‘No Russian company was ready for this. We needed another five years to clean up, maybe more,’ said Dmitry Gololobov

Will the London Stock Exchange clean up its act? or is the sweet taste of money too addictive? These are some of the hard questions the Western world needs to ask itself.

‘Putin likes people like Abravomovich and Yumashev to travel the world and tell people he’s not such a crocodile,’ said Alexander Temerko

‘Western leaders must take a realistic and long-term view of the implications of appeasing the Russians on such issues of fundamental human rights and the rule of law,’ wrote Robert Amsterdam .. ‘If not, those presently in power in Russia will take Western double-standards as a license for impunity. To deny, dismiss or discount the gravity of the consequences is to turn a blind eye to the lessons of history.’

Replace the word Russia with China/North Korea/Iran in the above quote. They are closely watching the war in Ukraine to see how the West reacts, or doesn’t. Just as toddlers push their parents to see what they can get away with until they are punished, these superpowers are looking for the boundaries . Where are the red-lines of the Western world?

…they came from a world where the Cold War had never really ended, where the only thing that mattered was restoring Russia’s geopolitical might. Theirs was a world in which, from the start of Russia’s transition to the market, factions of the KGB had seen capitalism as a tool for one day getting even with the West, a world in which Putin believed he could buy anyone. For Putin’s people, the encroachment of the West, through NATO, even closer to Russia’s borders was an existential threat, while the democracy movements that overturned pro-Russian governments in Ukraine and Georgia were seen as US-funded revolutions, not as an expression of the people’s free will.

This is now being played out in the ‘special police operation’ in the Ukraine. If the West wasn’t so busy getting rich of Russia, they might’ve seen the warning signs.

One senior Russian government official told the Financial Times that day that if Ukraine continued on a Western tilt, Russia was ready to go to war over Crimea to protect its military base there and the ethnic Russian population: ‘We will not allow Europe and the US to take Ukraine from us,’ a foreign policy official said. ‘They think Russia is still as weak as in the early nineties, but we are not.’

The former US national security adviser Zbigniew Brzezinski had written in 1996 that with Ukraine Russia was a great power, but without it, it was not: ‘This was not a new idea,’ said Yakunin. ‘More than forty years ago, when the US developed plans for the destruction of the Soviet Union, CIA documents said it should be accompanied by the separation of Ukraine from Russia.

When the Soviet Union collapsed and Crimea wound up in a different country, ‘Russia felt that it had not just been robbed, it had been pillaged,; Putin told the officials gathered that day. ‘Millions of Russians went to bed in one country and woke up across a border; in one moment they became minorities in former Soviet republics … But then Russia just dropped its head and swallowed the shame.’

Putin is petty as fuck and still nursing a grudge from 1990. Get over it dude.

‘When he came to power, he started out saying he was no more than the hired manager. But then he became the controlling shareholder of all of Russia. First they gave him a stake and then he took control. It’s a shareholder company of the closed type.’ ‘Putin is the tsar, the emperor of all the lands,’ agreed another tycoon.

Putin’s former economic adviser Andrei Illarionov: ‘People in the West think Putin is irrational or crazy. In fact, he’s very rational according to his own logic, and very well-prepared.’

Yury Shvets, the former senior KGB officer stationed in Washington was blunt about the origins of it all: ‘Wide-scale infiltration of the Western financial system by Russian organized crime started right on the eve of the collapse of the Soviet Union …’

The KGB and others made grabs for money and power as the Soviet Union quickly disintegrated.

… Russia has developed a weapon more powerful than anything it has ever possessed before: ‘You can’t use nuclear weapons every day, but you can use this black cash every day. It can be deployed to dismantle the Western system from the inside’.

The weakness of the Western capitalist system, in which money ultimately outweighed all other considerations, left it wide open for the Kremlin to manipulate.

… Putin’s former mentor Anatoly Sobchak, who on hearing that Putin was to be appointed prime minister said, ‘Don’t frighten me!’

Those who believed they were working to introduce a free market had underestimated the enduring power of the security men. ‘This is the tragedy of the twentieth-century Russia,’ said Pugachev. ‘The revolution was never complete.’ From the beginning the security men had been laying down the roots for revanche. But from the beginning, it seems, they’d been doomed to repeat the mistakes of the past.

If you want to understand how we got to the Ukraine war from the 1991 fall of the Soviet Union, please read this book. I hope the West will close the doors of capitalism to bad actors like the Russian state, clean up the regulations in financial markets, and save the people of Ukraine. We need to learn lessons from this conflict for if, or when, China decides to test the resolve of the Western world.

Tales From the Ant World by Edward O. Wilson

The Economic Weapon: The Rise of Sanctions as a Tool of Modern War by Nicholas Mulder

The Nobility of Failure: Tragic Heroes in the History of Japan by Ivan Morris

Madhouse at the End of the Earth: The Belgica's Journey into the Dark Antarctic Night by Julian Sancton